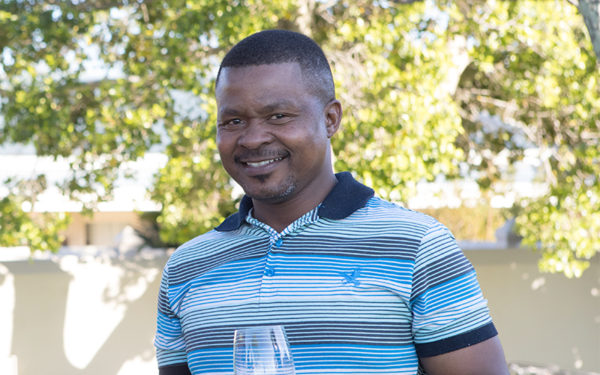 Not every hero’s story features a fearsome dragon and a swift white horse. Some heroic tales hinge on difficult circumstances and the ability to see the opportunity for growth when it presents itself. The story of Thembile Ntloko and his rise to success at Riebeek Cellars is one of the latter, and something that lies close to our heart. Here’s how this inspiring man came into our lives and paved the way to the role of Assistant Winemaker for himself over the course of 17 years.

“I grew up in Colesberg in the Northern Cape, where my father worked on farms in the vicinity. Times were hard, and I only finished my schooling up until Grade 9 before I started working, but my parents were able to give me one wonderful advantage – they taught me to embrace different languages. I was brought up to speak Xhosa and Afrikaans, and some Zulu as well. Over the years, this skill has proven very valuable as I worked to get where I am today,’ says Thembile.

After he left school, Thembile made his way to the fruit-growing areas surrounding Worcester to work in the orchards and vineyards there. It was only in 2000 that he ended up in the Riebeek valley when he came to visit some family over the December holidays and learned of a job opportunity at Riebeek Cellars over the harvest season.

“(Previous CEO) Mr Zakkie Bester had just been appointed and he gave me my first job at Riebeek Cellar as harvest hand in January 2001. The cellar environment was so interesting that I tried my best to learn all that I could. Mr Bester recognised my efforts and gave me the opportunity to grow in the company. By September 2001 I was appointed permanently, and in 2002 I was chosen as Team Leader, which was a big honour.”

Not one to rest on his laurels, Thembile then went on to take advantage of all the education opportunities the cellar made available to him, which included a series of short courses for senior cellar personnel conducted at Elsenburg Agricultural Training Institute. He excelled at these courses to the point where he was named Senior Cellar Assistant in 2007 and chosen to take part in an exchange programme to visit Bordeaux in France in 2009, where he represented Riebeek Cellars with pride.

“The trip to Bordeaux was the experience of a lifetime. Yes, it was nice to see a different place, but to me it was more about learning from our oversees contemporaries. The French approach winemaking in a completely different way than we do, and it was amazing to see it in practice when we visited their wineries,” says Thembile.

Alecia Boshoff, Production Manager and Winemaker at Riebeek Cellars, works closely with Thembile on a daily basis and says that he is an invaluable member of her team. “Thembile is an immensely hardworking and dedicated person. Over the years he has shown himself to be a huge asset to our company by putting his mind to growing and developing from a general cellar worker to assistant winemaker. He is a wonderful example of someone who is driven and motivated by innate perseverance. We are very proud to call him a member of our team,” says Alecia.

Thembile’s continued drive to succeed is evident from the fact that he has taken every opportunity that came his way to further his career in the intervening years since he came to Riebeek Cellars. This included everything from forklift training to HACCP, safety rep and fire competency. Even after he was named Assistant Winemaker in 2016, he has continued to throw himself into his studies by attending workshops on team leading, emotional intelligence, harvest procedures and more.

“I am currently busy with the course work of the National Winemaking Certificate from Wine Training, and my personal goal is to become a fully-fledged winemaker within the next five years. The first wine I want to make is a Chenin Blanc – I love the fresh fruitiness of the varietal and would love to contribute the skills I have acquired to the making of the fine Chenin Blanc vintages at Riebeek Cellars.”

Thembile encourages other youngsters and jobseekers to take advantage of the opportunities that are available to them. “You have to start small. It’s not the big leagues from day one. You may have to start as a harvest hand, but that gives you the opportunity to learn the business from the inside out, which is important – when you’re from the outside looking in, you miss a lot of things. To grow in this business, you have to show genuine interest in how things fit together in the winemaking process; you should be present in each moment and handle the tools and environment entrusted to you with care and respect. Start by taking care of those pumps and pipes as though it were your own and the rest will take care of itself,” says Thembile.

It is the drive and determination of individuals like Thembile that inspires the Riebeek Cellars team to create a working environment where employees are encouraged to develop their skills, in a manner that is environmentally and socially responsible and sustainable. We salute you, Thembile. Thank you for your invaluable contribution to our growth as a company thus far. Here’s to many more years of honing our skills side by side.

GET THE LATEST NEWS

Let's celebrate together with a sing-a-long, and a glass of Pieter Cruythoff bubbly! With an emoji, tell us the missing word in this love song. 🎶

Share on FacebookShare on TwitterShare on Linked InShare by Email

Our vineyards are mostly dry-land vineyards with some supplementary irrigation. They produce smaller, very compact grape bunches with small berries of exceptional concentration that results in wines with complexity and expression.

Read more about our vineyards: ow.ly/Qhao50yhWrL

Share on FacebookShare on TwitterShare on Linked InShare by Email